Tip of the month - To prevent early hypotony with a non-valved aqeous shunt, always occlude the tube with a suture

To prevent early hypotony with a non-valved aqeous shunt, always occlude the tube with a suture


The Science behind the Tip

The safe use of non-valved aqueous shunt implants, such as the Baerveldt (Advanced Medical Optics, Inc., Irvine, California, USA) or Molteno (Molteno Ophthalmics Limited, Dunedin, New Zealand), necessitates that some form of suture occlusion is used to prevent the devastating hypotony in the early postoperative period that might otherwise occur. There are a number of ways of achieving this. However, many of these are poorly titratable in that it is not difficult to prevent hypotony, but the result can often be a dangerously high intraocular pressure (IOP) in the early postoperative period. Methods that may be employed to prevent hypotony include total occlusion of the extra-cameral portion of the tube under the conjunctiva with an absorbable ligature such as a 7-0 vicryl, total occlusion inside the anterior chamber with a prolene suture that can be lasered later, or internal occlusion with a 3-0 nylon "supramid" suture or 3-0 prolene. None of these are completely titratable.

For many years the author's practice has used, to useful effect, a variation of the 3-0 nylon "supramid" (Supramid, Jackson Inc, Alexandria, Virginia, USA) suture technique, originally described by Sherwood in 1993 (1). One problem with an intra-luminal occlusion technique is that the resistance to aqueous flow that is generated, and subsequent intraocular pressure, is still subject to the vagaries of manufacturing variability in the diameter of the occluding suture and the tube. In simpler words, some sutures of the same brand form a tighter obstruction inside the tube than others.

One way to compensate for this variability in the manufacturing process is to use the intraluminal occluding suture to provide subtotal occlusion eg. inserting the supramid most of the way (8-10 mm) along the length of the tube, but not right into the anterior chamber. In most patients this will provide some resistance but insufficient to prevent hypotony. In a minority the suture will be tight enough to prevent hypotony on its own. However, in most patients if the tube is ligated, not with a very robust, tight ligature such as the traditional 7-0 vicryl, but with 10-0 nylon, extra resistance can be achieved to prevent hypotony (Figure). While it would be impossible to ligate a tube effectively using 10-0 nylon alone, it is possible with a 10-0 nylon suture to achieve the 10% occlusion required to prevent flow in a tube that is already 90% occluded with a supramid. If the IOP is high in the early postoperative period, the ligature can easily be lasered in out-patients, often using only 1-2 burns with the argon laser, re-opening the tube by around 10%, thereby reducing the IOP, without a high risk of serious hypotony. 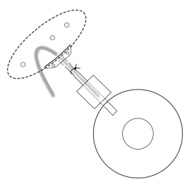 In general when employing this technique, it is worth using two to three, rather than one 10-0 nylon ligature. The reason is that 10-0 nylon is not a strong suture and sometimes one ligature may not provide sufficient resistance, or may unravel. The advantage of using more than one, also is that a staged drop in IOP can sometimes be achieved, by lasering one at a time.

Legend to the figure.
Diagrammatic representation of a Baerveldt implant partially occluded internally with a 3-0 Nylon Supramid suture (Jackson Inc.), with an additional occluding 10-0 nylon suture which can be lasered in out-patients if the postoperative IOP is too high. In practice, because the 10-0 nylon suture is relatively weak, providing little tension, 2-3 rather than 1 ligature is often used in the author's practice, ensuring that hypotony is avoided, and permitting a staged drop in pressure as the sutures are lasered one by one.