Small field depressions can be more worrying than large ones

The Science behind the Tip

Much of the decision making in modern glaucoma practice is based on automated visual field test results. Careful examination and correct interpretation of all parameters is key in the follow-up of all patients. Establishing a clinically relevant defect should pose no difficulty, provided some pitfalls are avoided. Below are 2 classical examples of a possible wrong interpretation of test results. 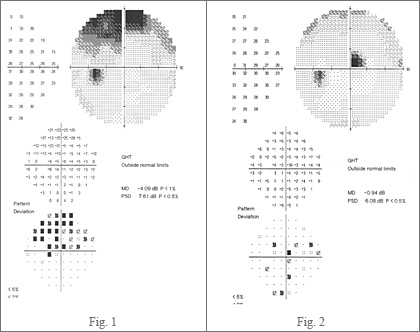 At first sight alarmingly large and deep depressions can actually be false and due to test artifacts, low patient's reliability or physiological phenomena(1). The first figure shows a test result of a patient with a variable degree of ptosis and fatigue. The deep superior midperipheral depression typically leaves the paracentral field unaffected, but it can occasionally involve practically the entire superior hemifield on the pattern deviation map. There is no sign of glaucomatous damage to the optic disc.
If the ptosis hampers the follow-up of such patients, the upper eyelid can be elevated and taped during the testing.

The relatively small paracentral depression in the second figure on the other hand might be overlooked or dismissed as a patient fatigue effect. It corresponds however with a notch of the optic disc rim and signals that the patient has just converted to glaucoma. He needs prompt and adequate therapy.