Heart failure is no contraindication to β-blocker therapy

The Science behind the Tip

Contrary to long-held beliefs, ß-blockers do not aggravate heart failure and are even beneficial in the treatment of the disease(1-3). Patients with heart failure have decreased cardiac output and as a consequence increased adrenergic activity. The resulting activation of cardiac ß1-adrenoceptors leads to increased heart rate and contractility. This is a compensatory mechanism primarily directed at restoring cardiac output. But over time it can lead to worsening of the disease and sudden arrhythmic death. ß-Blockers inhibit this downward spiral. 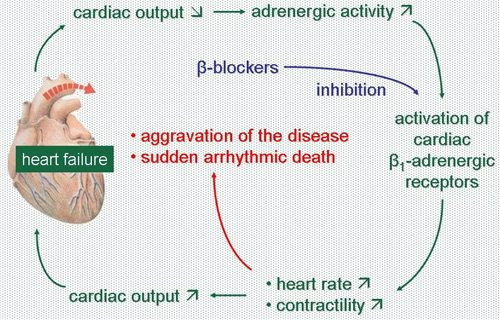 They have been shown to reduce morbidity and mortality of patients with mild, moderate and severe heart failure. The impressive survival data collected from several large randomized trials have in recent years made ß-blockers a component of standard heart failure therapy. Such therapy is best carefully initiated by a cardiologist. The initial dose is low and should be gradually increased to avoid initial myocardial depression.

It is important to note that sinus bradycardia and arrhythmias (that is second or third degree atrioventricular block) do remain strong contraindications to topical ß-blocker therapy(4).