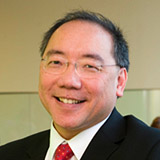 Professor Sir Peng Tee Khaw, PhD FRCP FRCS(Glasgow) FRCS(Eng) FRCOphth FCOptom CBiol FSB FRCPath FMedSci FARVO, was recently knighted in the Queens Birthday honours list for his distinguished professional career. He qualified from the University of Southampton Medical School and was a then a Resident at Moorfields Eye Hospital before undertaking a postgraduate fellowship in cell and molecular biology of ocular wound healing at the UCL Institute of Ophthalmology and University of Florida, USA. This research work resulted in a Doctoral Dissertation earning him a PhD.

He studied paediatric ophthalmology under Noel Rice at Moorfields, before becoming a Consultant ophthalmologist on the Staff of that Hospital. He was appointed professor with clinical and research responsibilities both at the hospital and the Institute of Ophthalmology.

More recently he became the Director of the UK National Institute for Health Research - Biomedical Research Centre in Ophthalmology of both institutions, then the assistant national Director for Ophthalmic R&D in conjunction with Professor Usha Chakrabati in Belfast. He was a member of a small group set up by Professor Sally Davies, Head of National R&D, to develop UK Research Strategy.  He is also Director of Research & Development at Moorfields Eye Hospital and Director of the Eyes and Vision Programme of UCL Partners, one of the five UK Academic Health Science Centres of excellence.
He is Professor of Glaucoma and Ocular Healing, and Consultant Ophthalmic Surgeon at Moorfields Eye Hospital and UCL Institute of Ophthalmology.
His numerous achievements include, among others, groundbreaking studies on the modulation of the healing response after glaucoma surgery, techniques to improve the safety of trabeculectomy and continued caring for difficult paediatric patients.
An unstoppably passionate advocate for eye and vision research, he was able to raise large sums for research programmes and new clinical facilities, including the largest childrens eye hospital in the world, named after one of his patients.
Internationally, he was a member of the Board of Trustees of ARVO in 2008/2013, and in 2012/3 he served as President, the first ever UK-based ARVO president;  in 2013 he was elected to the Board of Governors of the World Glaucoma Association.
He is married, and has two daughters.

Professor Sir Peng Khaw has actively participated in the European Glaucoma Society from the earliest stages of his admirable career.
We congratulate him for this achievement, which reflects positively on European ophthalmologists, and especially on the community of those fighting glaucoma.


The Executive Committee of the EGS